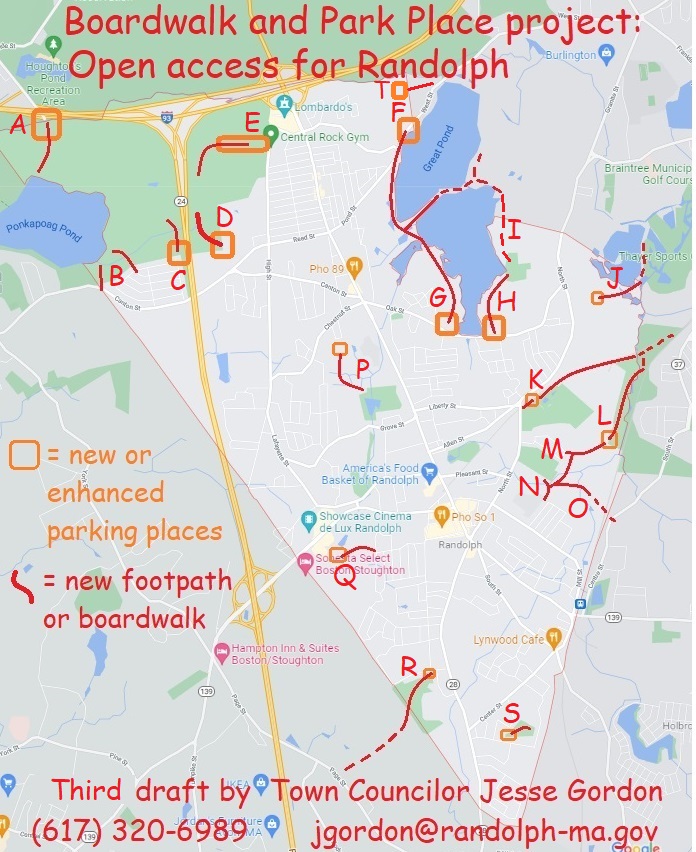 Randolph has many lovely parks and conservation areas -- but we're not allowed in!

This project opens access to our existing parks, creating access points by foot or by car, for 21 existing park locations around Randolph (detailed below). There are no proposed new land purchases and no new designations of park areas -- we have already invested in these parks, and now we should allow ourselves to enjoy them!

The map to the right proposes "boardwalks" shown in red. These boardwalks would be like the existing popular boardwalks at Powers Farm -- raised wooden walking paths in swampy or difficult-to-access areas. In some cases ground-level footpaths are all that's needed, and sometimes only new signs are needed.

For example, point "Q" is a swampy area between the Bittersweet Lane apartment complex and the Post Office across from the theater on Mazzeo Drive. That's only a few hundred yards distance -- it could be a walking route for thousands of residents to those businesses. But it's a swampy area so no one walks through it -- instead it's a 2-mile walk to the High School and back.

Sometimes all that's needed is a place to park your car [shown as orange boxes]. Creating parking places in or near our existing parks means more people can use them, for their kids or for recreation or just to enjoy the outdoors. A model for a small parking area is Soule Park off of Grove Lane -- just three parking spots, but from there, you can walk to Norroway Pond.

For an example of where parking places are needed, look at point "S", which is the South Randolph Conservation Area. Even people who live adjacent don't use it, because the only signs say "No Dumping". What if the signs instead said "Park here and welcome to walk in"? 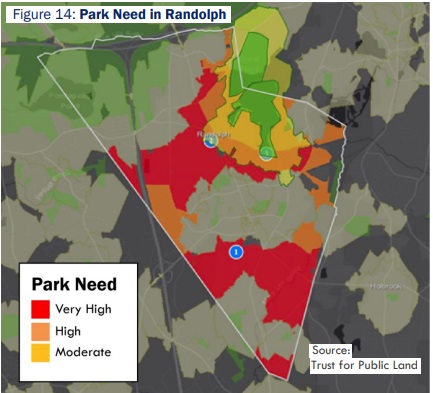 Description of each proposed Boardwalk and/or Parking Place: