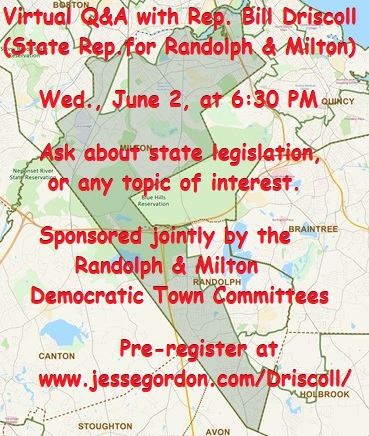 The discussion will include legislation of interest to Milton and Randolph, and Rep. Driscoll will be asked his opinion on pending legislation as well as his opinion on the chances of the legislation passing. There will be an opportunity for Milton and Randolph Residents to ask questions as time permits. The Milton Democratic Town Committee has asked Rep Driscoll to speak about his work as chair of the COVID-19 & Emergency Preparedness & Management Committee and both Democratic Town Committees are interested in learning about H.805 relative to absentee voting.

"The Randolph Dems support no-excuse absentee balloting, but our Town Council voted against it," says RDTC Chair Jesse Gordon, who voted for the measure on the Randolph Town Council along with Councilors Clerger, Clifton, and Huff-Larmond. "So we're looking for a state bill to raise the issue again, and we'll ask Rep. Driscoll to co-sponsor the bill." No-excuse absentee balloting was used successfully in 2020 across the Commonwealth, allowing anyone to ask for an absentee ballot without providing a reason or documentation, but the special pandemic rules will expire before the November 2021 elections.

On other pending legislation, "The End of Life Options Act (Bill H2381) addresses the compassionate choice and personal decision-making for people with a terminal illness,“ says Toby Lynne Schwartz, co-Vice Chair of the RDTC. "We held a forum last year and the Randolph Dems voted unanimously to support this bill! We would like very much to get Rep. Driscoll’s opinion and his support by becoming one of the bill's 58 co-sponsors." Details of this legislation and others are on Facebook and below.

To register for the meeting, go to: https://zoom.us/meeting/register/tJItdeygrDsrGdCBEKjVnttIwW9tc8djBx-X (or click the link on the Randolph Dems' or Milton Dems' Facebook pages). After registering, you will receive a confirmation email containing information about joining the meeting