Click here for original article in the Randolph Journal-Sun, Jan. 23, 2021 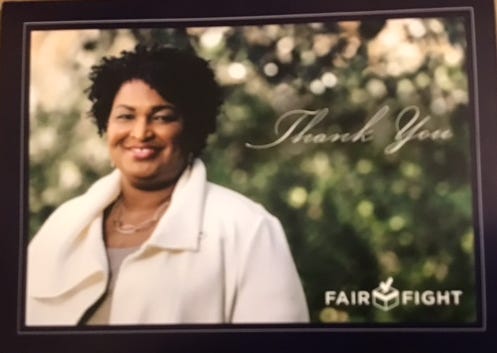 The Randolph Democratic Town Committee collectively contributed $162 to the Georgia Senate elections, helping the two Democrats win the Jan. 5 runoff election and giving the Democratic Party a majority in the U.S. Senate for 2021-22.

"We bundled donations to Fair Fight, and to the Georgia Democratic Party," said Sandi Cohen, the Randolph Dems' treasurer. "Several members also made individual contributions to the (Ralph) Warnock and (Jon) Ossoff campaigns; and we also bundled $190.16 to the Biden/Harris campaign back in October."

Fair Fight is the group founded by Georgia House Minority Leader Stacey Abrams, to fight voter suppression in Georgia. Abrams lost the 2018 Georgia Governor election in what some view as a case of voter suppression of African-American citizens. Fair Fight registered thousands of minority voters since 2018, most of whom voted for Democrats.

Warnock and Ossoff won the two U.S. Senate seats against two Republican Senate incumbents. The runoff election on Jan. 5 took place because no candidate got more than 50% of the vote in the Nov. 3 elections. Georgia election law calls for a runoff of the top two vote-getters in that case; Massachusetts doesn't have runoff elections but many states do. Some view runoff elections themselves as another form of minority voter suppression.

"We were honored to donate to these crucial elections," Cohen said. "We stand in unity with our fellow Georgia Democrats to restore democratic values for our country." 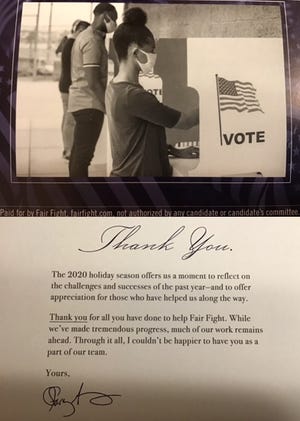 "The Randolph Dems recognized the importance of the Georgia Senate elections and we were thrilled to help Democrats regain the Senate majority," said Jesse Gordon, chair of the RDTC. "The Senate majority will help (President) Biden implement his platform to unify America in recovery from the pandemic, from the economic recession, and from the chaos of the Trump era."