Sunday, January 27, 2019 4:00-6:00 p.m. at Stetson Hall The MLK Day event inter-faith panel included a priest, an imam, a rabbi, and a student. The event was snowed out the week prior, and the rabbi could not attend on Jan. 27, so Jesse Gordon was asked to present the Jewish perspective on the topic: "What does the Rev Dr. Martin Luther King, Jr.'s legacy mean to you personally (and in your ministry, to the pastors on the panel)?"

I'm presenting the Jewish perspective on an inter-faith panel, so I'd like to talk about Jewish participation in the Civil Rights movement and in MLK's legacy.

Who here has seen "Mississippi Burning" (the 1988 film about the civil rights movement)? There were three young men killed by civil rights opponents--one was an African-American--James Chaney--and two were Jewish--Andrew Goodman and Michael Schwerner.

Those two Jewish civil rights activists were not alone--30% of the Freedom Riders were Jewish. The percent of Jews in the population at large is 3%--so Jewish representation was ten times stronger as Freedom Riders, and about the same in the civil rights movement overall.

Jews were present in alongside Martin Luther King too. In the Third Selma march, there's a famous photo--it's the one on Wikipedia (shown below). On MLK's right is John Lewis, who became a civil rights leader in the U.S. House of Representatives. On MLK's left is Rabbi Abraham Joshua Heschel, and there's another Jewish rabbi right behind MLK, Maurice Davis. 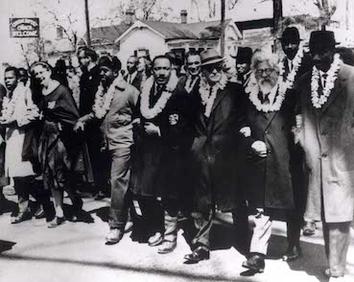 Jewish participation in the civil rights movement pre-dated MLK too. The NAACP was founded in 1909 as a multiracial project. The second president, from 1930 to 1939, was a Jewish civil rights activist, Joel Elias Spingarn. The NAACP today still has an annual award named after him, the Spingarn Medal--recently awarded to Maya Angelou, Rep. John Conyers, and Sidney Poitier, among others.

So how come? I'd like to say "it's because Jews are good people," but that's not it. Jews fight racism for pragmatic reasons: where's there's racism, there's anti-Semitism.

And where there's anti-Semitism, there's racism. And sexism. And homophobia, and anti-Islam, and xenophobia. We all have common cause together.

Why do Jews fight for equal access to college for African-Americans? Because doing so benefits Jews too--that's common cause.

I attended Brandeis University, a historically Jewish college, which was founded in 1948 because of strict caps on Jews attending Harvard--hence its nickname "the Jewish Harvard."

When did those caps on Jewish students at Harvard finally get removed? In the 1960s to 1970s.

When did caps on African-American students at Harvard get removed? In the 1960s to 1970s. That's common cause.

But the civil rights movement wasn't done in the 1970s.

I read a biography called "Trump Revealed" which included how Donald Trump bought Mar-a-Lago in 1985. He fought the Palm Beach Town Council to change the town by-laws which let private clubs exclude blacks and Jews. Trump won. Blacks and Jews are now allowed at Mar-a-Lago and other private clubs in Palm Beach--that's common cause--and that's Donald Trump's favorite evidence that he's not racist nor anti-Semitic.

But the civil rights movement wasn't done in the 1980s.

In the 1990s, I lived in northern Arkansas, in a town called Harrison. It's the capital of its County, and had a Confederate flag on its town hall lawn--just under the U.S. flag and just far enough off the lawn to be legal. Harrison had just one Jewish family--mine--and just one African-American family. On the road out of town to Branson Missouri, the local entertainment hub, the highway was "sponsored" by the Ku Klux Klan, with prominent and very unwelcoming signs announcing the KKK as the "civic organization" that would clean that stretch of highway. I wondered who they cared more about targeting--my family or the African-American family--that's common cause.

But the civil rights movement wasn't done in the 1990s.

Remember that "Unite the Right" rally in Charlottesville in 2017? A neo-Nazi rammed his car into a peaceful protest and injured dozens and killed one--his neo-Nazi philosophy was equally racist and anti-Semitic. When those "Unite the Right" people came to Boston for another rally, I joined the "Black Lives Matter" counter-protest--that's common cause.

MLK's legacy is a long-term movement that hasn't ended yet, and our common cause is to continue the movement.

What are you doing to preserve that legacy today; and how would you recommend that others preserve it as well?

To preserve MLK's legacy, we should fight today's forms of social injustice--in our town.

I looked around and saw that a couple of years ago, Newton High School got a new building for over $100 million. At the same time, Randolph High got some new windows. Newton's population is 26% minority; Randolph's is 58% minority. I'd call that economic injustice.

You know that abandoned federal Nike missile site on North Randolph? It actually had three different parts, one in Braintree, one in Canton, and one in Randolph. The part in Braintree got a nice hiking trail and picnic area. The part in Canton got a nature center. The part in Randolph is still a toxic waste site. I'd call that environmental injustice, which I think MLK would recognize as another form of social injustice.

Then there's the Holbrook Transfer station--built right on the Randolph border--a classic method for I'd call that economic injustice. Holbrook gets all the benefit from that, while Randolph gets the stench and the trucks and all the environmental externalities.