Click here for original article in Feb. 20, 2018 in the Randolph Herald and The Patriot Ledger

Some Randolph residents are calling on town council to address the arrest of councilor James Burgess on drug charges at a public meeting where people can express their concerns openly.

A crowd estimated at two to four dozen gathered Sunday on the steps of Stetson Hall for what they called a peace vigil to voice their concerns about public safety and transparency in light of Burgess’s arrest on drug charges earlier this month.

Burgess, 49, of 12 Fairmount St., was arraigned on Feb. 7 on charges of conspiracy and methamphetamine possession after police raid his home following an investigation into his roommate, 33-year-old Scott M. Donaghue.

Burgess was released on his promise to abstain from drugs and alcohol and return to court on March 12.

Through their investigation, police learned that Donaghue sold methamphetamine from the Fairmount Street address, but kept his supply at a Public Storage facility at 805 North St., Randolph, where he rented two units, prosecutors said.

Police raided the storage units and the Fairmount Street home owned by Burgess, who told police he was a user of methamphetamine and had 1 gram of inside a nightstand in his bedroom.

Burgess did not attend the town council meeting on Feb. 12, which residents say Council President Arthur Goldstein opened with a stern warning that no personal attacks would be permitted. Resident Jesse Gordon said Goldstein cut off one speaker as soon as Burgess’ name came up during the public comment period.

“We feel that had a chilling effect on freedom of speech, and is our rationale for calling for a public vigil,” Gordon said. “We want this to be a model for what town council could do at its next meeting.”

Residents were given about three minutes to talk, and were not allowed to make personal attacks or spread rumors.

In a statement read by Gordon, Goldstein, the council president, said the council takes the charges seriously, but calls for due process and wants to “allow justice to take its course.”

Residents said they felt town council failed in its responsibility to the public by failing to even acknowledge Burgess’s arrest. 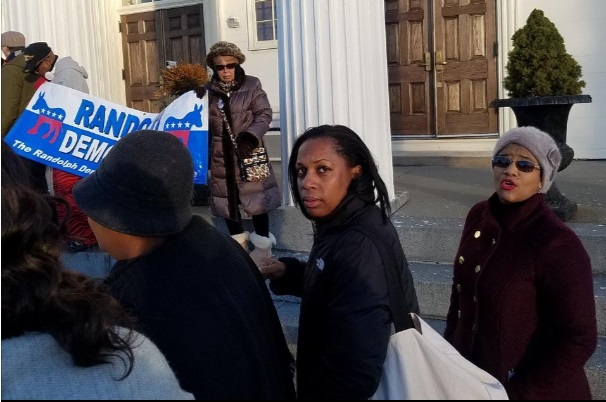